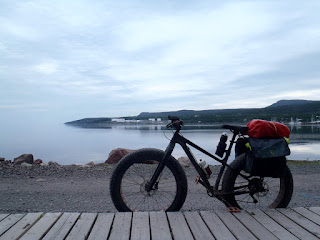 In 1969 the last passenger train ran on the Newfoundland rail system in favour of bussing.  In 1987 the entire railway system was abandoned.  The rails and ties etc were taken up.  Subsequently it became part of the Trans Canada Trail System.

Some of my friends have ridden the entire 880 kilometer distance from Port aux Basques to St. John's.  I contemplated doing it this year but with Covid-19 plans have changed.  Instead this year I decided to test my setup with a couple of back to back 100 km rides.

I left from Holyrood destined for an overnight camp at LaManche. 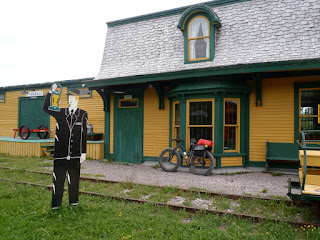 Eleven km in I was at the old station in Avondale which as been turned into a museum. It was overcast and cool, excellent for riding.  The railbed is limited to a degree or two of rise so it takes a winding course to avoid steep inclines, often times threaded between ponds. 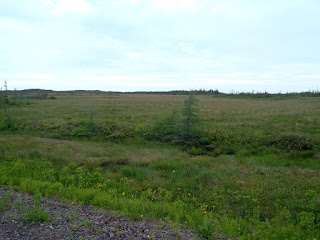 It runs across bogs where the bed had to be constructed to support the weight of traffic and ... 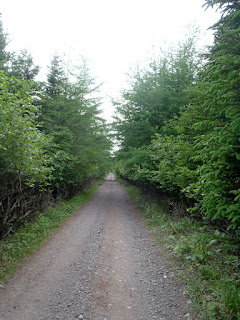 ... over solid ground here hemmed in by trees.  The trees and undergrowth are kept back by the use of all terrain vehicles.  In some places the railbed has been turned into dirt roads that people use to commute to cabins at various places. 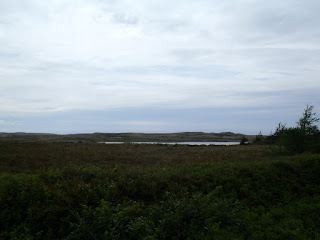 I had my GPS mounted on my handle bars so I could keep an eye on my distance and speed.  I began a steady rise in elevation and distant hills appeared.  I surmised I was near the Long Harbour / Normans Cove turnoff where there's a good downhill and uphill section of the Trans Canada Highway.  I topped out at 167 meters. 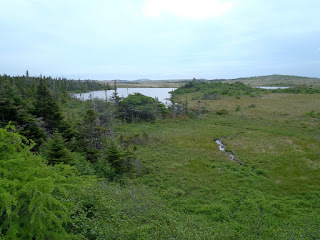 In places the railbed had to be raised well above the surrounding country side to stick within grade parameters.  In those places I had great views looking down on ponds and bogs. 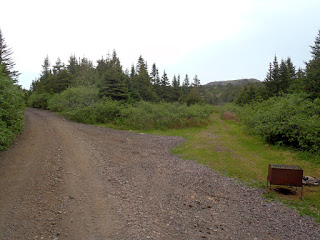 At Rantem Harbour Station the side line still exists but is not often used and doesn't bear the same amount of traffic.  I made a mental note that maybe it might be an interesting side shoot to investigate sometime in the future. 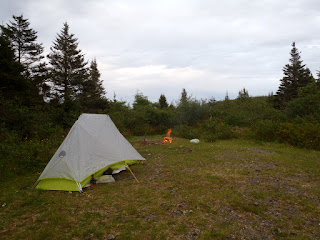 I had planned to leave the rail line and ride an ATV track down to the abandoned village of LaManche.  When I reached the access road to Little Harbour I was at 104 kms and still had 6+ kms to my planned campsite.  So. I decided that was far enough and backtracked to a fine campsite near by.  I wasn't thinking so much about the extra distance but about the next morning having to ride back up a questionable track of some 150 meters of elevation.

I set up my tent, cooked supper, all the while swatting away black flies, and started a small fire to keep the flies away.  As the fire burned down I got ready to hit the hay after a good days riding quite pleased with myself.

Tony
I'm one lucky guy and I know it. That's why I picked "Kuviasuktok" as my paddling handle; translated from Inuktitut means "is happy". I enjoy the outdoors and I enjoy it without the noise of motorized transportation. I prefer a kayak over a motorboat, skiis over skidoos and mountainbike over motorcycle. I've been active all my life and take great care of the vessel life has been poured into for me. My family is my first priority. My childern are all selfstanding adults now, I'm retired and anxious to do stuff I've always wanted to but didn't have time or money to before. One of those things is seakayaking.